I’ve moved to a new role where I will be doing a lot more “devops” type work which hopefully comes with more interesting subjects to start writing about.

The Cloudera cluster I have started working on is hosted in AWS and has all the security bells and whistles turned on; Kerberos, TLS etc.

Recently a support ticket came my way where the Email Action in Oozie was failing, on top of this there was no notification around job success and the Kill action wasn’t sending emails…. more than likely Oozie isn’t correctly configured for email.

As mentioned before, we use TLS everywhere possible and want to use Amazon’s Simple Email Service endpoint to relay the messages through. TLS SMTP isn’t supported directly with Oozie so there is a requirement to put something in the middle. In this case, the something is going to be postfix.

There are a number of details you’ll need to get from AWS Management Console to get things set up.

In the AWS Management Console, navigate to the SES service and in the right hand side select SMTP settings. This is where you’ll find the endpoint you need to use and you can use the Create SMTP Credentials button at the bottom of the page to create some keys. _ Keep in mind that although these keys look like normal AWS Access Keys, they are actually SMTP keys and are specifically for authenticating with AWS SES _

Now on the left choose Email Addresses and follow the process for validating an email address as required by SES.

These steps assume that you’re running a yum flavoured Linux, its pretty much the same if you’re working with Ubuntu if you interchange the package tooling.

First we need to install postfix

The configuration for postfix is in /etc/postfix/main.cf. This is where the relay to AWS SES is going to be happening.

There are a couple of tweaks that needed to be done in this file in addition to adding the relayhost section.

Now the relayhost section needs to be added so that it can forward to SES correctly.

In my case, I’m hosted in Ireland (eu-west-1) so my endpoint for SES is email-smtp.eu-west-1.amazonaws.com

You can now save main.cf, we’ve finished with that.

You may have noticed the smtp_sasl_password_maps section pointing to a sasl_passwd file. We now need to create that. So create the file /etc/postfix/sasl_passwd and add the following using the credentials created for the SMTP user above.

You can now create the hash of this file, set the ownership and permissions then remove the new sasl_passwd file with the cleartext keys

You can configure Oozie in Cloudera Manager. Go to Oozie service -> Configuration. Set oozie.email.smtp.host and set the value to the IP address of the server you’ve installed postfix. (To keep it simple, I installed postfix on the Oozie server itself. I had to use the IP as Oozie doesn’t like localhost)

Set the oozie.email.from.address you’re going to be sending from to the value setup in SES Management Console email address page.

Restart Oozie and Hue then create a test workflow with an Email Action sending an email and run. All being well, the email will be sent and the workflow action will go green. Check the logs of the workflow if it doesn’t work, it should be clear from there.

I put the skills from my CV into it and had a play with the output… I think it looks quite cool.

For a while Garmin have been adding “wearable technology” functionality to their watches - notifications from the phone etc. I got a Garmin Fenix 3 for Christmas and had a play with the vast number of watch faces and widgets that were available.

The recent updates have really added some great functionality and I ended up settling on the out of the box digital face as my normal watch face but I still wanted to have a go at creating my own watch.

###Monkey C The programming language used to develop the faces, apps, widgets and data fields is called Monkey C and the IDE is mostly intended to be Eclipse.

Its almost certainly going to be worth your time looking at the Garmin developer site to get the full over view of whats required, but I’m covering the headlines below.

####Getting the SDK First you need to download the Garmin SDK from here. I’m using a Macbook so I’ve dropped it in /usr/local/garmin-sdk.

####Eclipse Add in If you look at the getting started pages here you’ll get all the information about adding the Eclipse add in which will give the you project template and intellisense as well as access to some richer wizards for interacting with the simulator.

I’m not very comfortable using Eclipse so I was pleased to see that there is an Intellij plugin that someone had started.

####Intellij Plug in The IntelliJ plugin is added in the normal way, the details about it are here.

At the time of writing this it was fairly basic and doesn’t have many features, I had to rely on the API docs to get the message signatures of everything I needed to use.

###My First Watch face And so to my first watch face. I wanted to have a clean digital watch without the clutter of bars and tickers. I did want to know my relative step progress and the current battery level though, I’ve been caught out a few too many times.

My understanding from the docs is that your watch face updates minutely in low power mode until the gesture of looking at the watch is detected then it becomes every second. There are some methods which are called during this state change but I didn’t have any need for them.

Your watch face must extend the Ui.WatchFace class

Running in IntelliJ for me is a case of Shift+F10 and the Run Configuration loads the simulator.

In the simulator you can set the levels of activity and change properties of the device such as battery status and GPS etc. 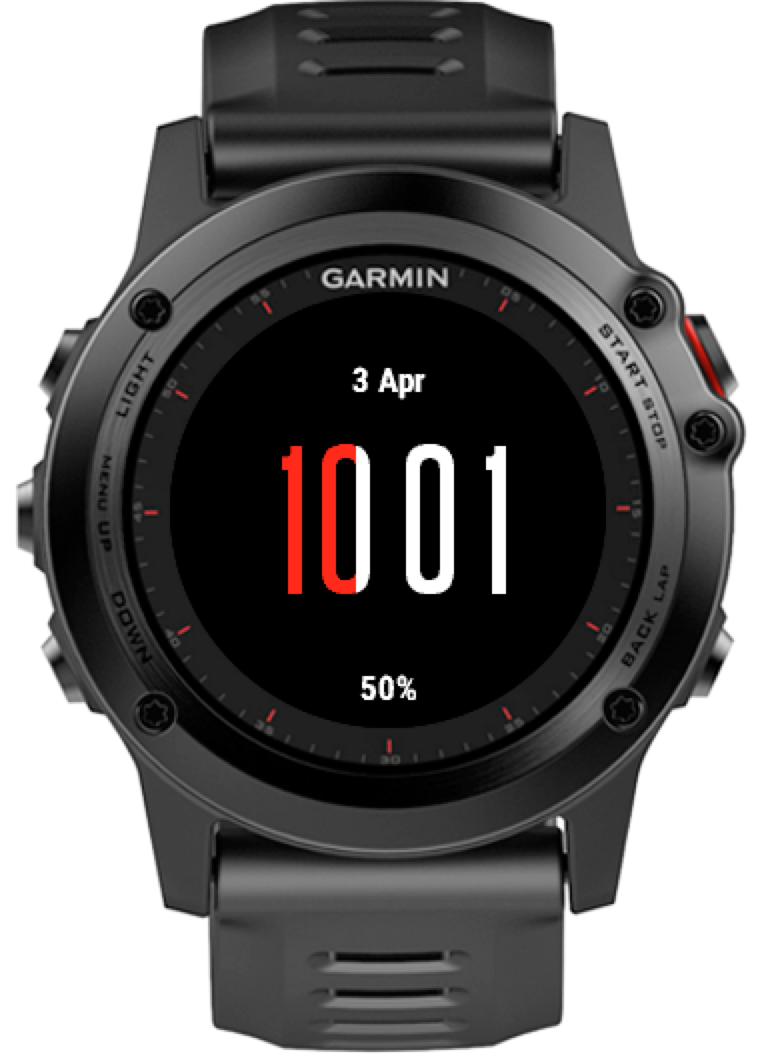 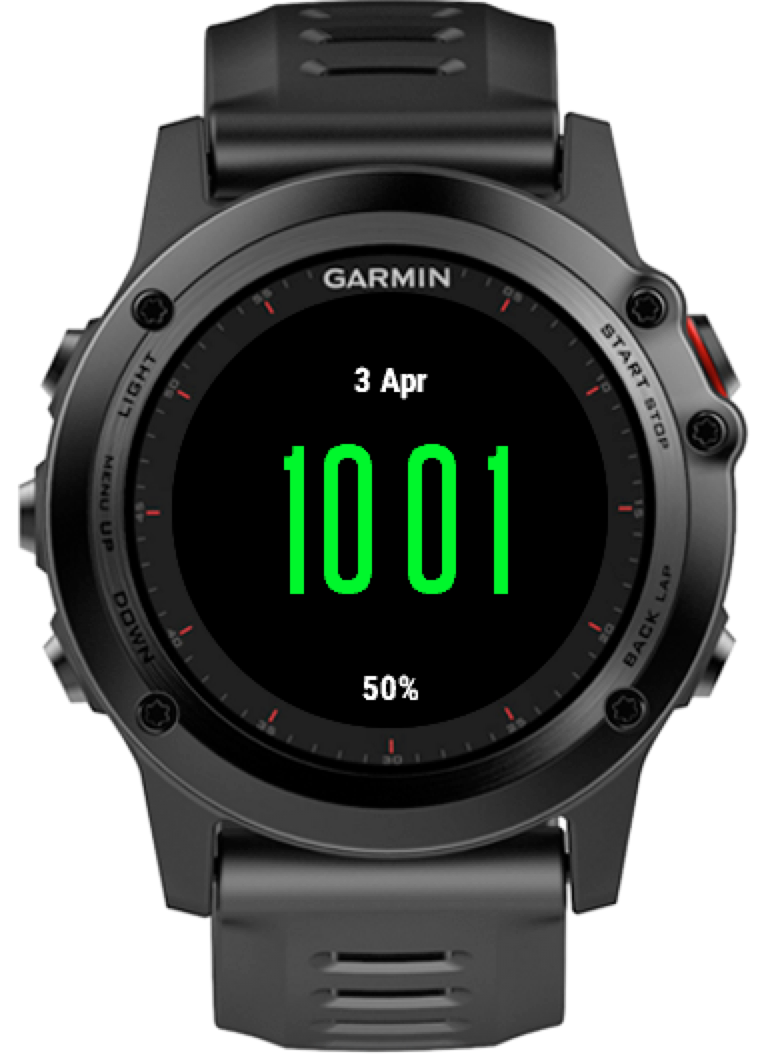 Today I’m at my first Scala eXchange conference - the 5th annual one to be precise.

The day started with the keynote session by @jessitron which was both inspiring and enlightening. The general tone being that code should be clear and useful so that others can learn.

Drawing on examples where opaque libraries with poor documentation or overly simplified examples limited the accessibility to the new user. Words like “Simply”, “Just”, “Obviously” and “Clearly” are the scourge of documentation and for the most part lazy.

Contribution to any project should be welcomed, its an active attempt to say “hey, I’m here to help and I’m interested”. Even if the contribution isn’t entirely helpful or needs polishing it should still be embraced and encouraged.

I’ve mumbled for years about how to get involved with a project assuming that I needed to offer huge value on the first pull request - Jessica has help me see that the first step is to just do something.

If only the second speaker had been listening, maybe his talk would have been less obscure and contained less usage of the words “Simply” and “Just”.

I need to write a couple of unit tests for some code to add a log entry into HDFS but I don’t want to have to rely on having access to full blown HDFS cluster or a local install to achieve this.

The following dependencies are required for the test to work.

The code is reasonably simple, I’m creating the cluster in the Test setup and tearing it down during the teardown phase of the tests

This makes a cluster available for the tests, in this case its a simple log entry which is going to return the path to the log entry, because this has a guid in I need to just make sure the file is created starting as expected